I had forgotten to write this up from a week or so ago. To enable the use of a standard top radiator hose, Richard at Glencoyne describes how to use the series thermostat housing with the Disco thermostat. This interested me as I had a housing that I’d removed from my 109 many years ago. Back then I didn’t realise that it was OK to grind off the rusty/leaky bit so I replaced it. Just as he says, it holds the thermostat in place in the head. So after a good clean-up, new gaskets and the addition of a homemade blanking plate I was able to add the standard series hose (577346). 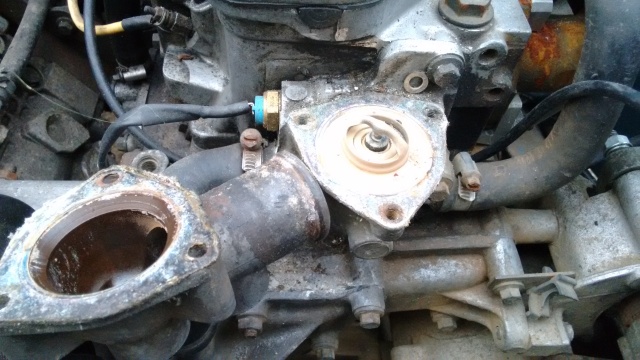 Thermostat housing – off with the old

And then the old (empty) series housing clamps on top of this to hold the Disco thermostat in place. The series hose now fits perfectly without modification.

For the bottom hose it had to be a flexible affair. I found one on the Ebay shop of thehosemaster.co.uk, Ronyflex 32mm x 38mm x 500mm. A bit of a struggle, but I think it will be OK.

I was looking around for one of these at a reasonable cost and I got one from Ebay complete with the cage that holds it in place. The seller had wrapped it in newspaper like pre-1980s cod and chips and inserted it into an ordinary large brown paper envelope. Unfortunately, it was half full of rusty, oily sludge that had leaked out everywhere, soiling other mail. Royal Mail wrapped it in a large polythene bag with an understandably snotty letter.

It took a whole day of soaking with soda crystals to clear the sludge, I cannot imagine the state of the engine it was attached to. A quick rub-down and paint to the bracket and it’s now serviceable.

That’s it! Thanks for reading.