Even the evenings have been hot this week, uncomfortably so, so not the best of jobs to undertake and I’m not working as quickly as I’d like, but it’s been lovely to get outside. The bonnet is so hot that you can hardly bear to touch it for more than a few seconds.

I continued rubbing down the top of the bulkhead, particularly where the vent seal rubbers were removed. The rust is a little deeper than at first thought, but still much better than most.

Rubbing down the vent seal recesses

I placed an order with Paddocks for new vent seals and a pair of the special stepped hinge bolts (346989) that secure the windscreen to the bulkhead exterior. Next day I remembered that I also needed new seals for top and bottom of the screen. Doh! And I ran out of rust converter halfway. Next time Lidls have their ‘Pattex’ in stock I will buy the lot. Instead I had to pay £5.99 for a tiny bottle of Hammerite Kurust at the local auto factors.

Meanwhile, in the cool of the back yard I immersed the associated bracketry in a tub of white vinegar and water solution. It really fizzed, then I realised that with the galvanised hinges I had created a battery. I couldn’t resist checking with a multimeter, connecting one side to a hinge and the other to a screwdriver that I dipped in and I was amused to see a voltage of just under 0.5v.

I disconnected the speedometer cable from the rear of the instrument panel and removed the plate covering the wiring aperture, sliding it down out of the way. Most of these wires will be replaced or tidied, then run through conduit, so for now I will tape them all together whilst painting. The plate had been sealed with a black tarry substance which had become rock hard, this was chiselled off so that I can treat the superficial rust underneath.

With the bonnet completely removed I can better get to the drain channel and its underside, rubbing down light surface rust and treating with the Hammerite Kurust. 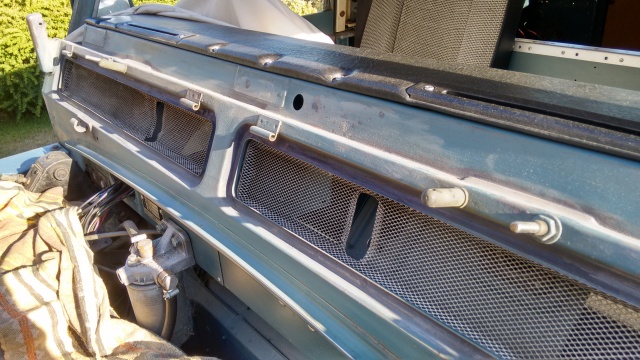 More preparation to follow later in the week, meanwhile a short story about my ‘other’ vehicle…

I have a ‘runabout’ car, currently a Ford Fusion, although I’m looking at changing this soon, I fancy a Volvo this time for some reason. Nearly every runabout car I have owned, I’ve been its last owner, I find this strategy best suits my budget. I just can’t get interested in ‘other’ cars, even the servicing is done by a local garage, and as long as it gets me places I don’t care.

Whatever car I own, our drummer Marty takes the p*** mercilessly. My last one, a Toyota, he claimed made me look like a drug dealer, and there were many tricks and japes on this subject.

With the Ford Fusion, he seemed fascinated by the fact that it was a ‘Fusion 2’. He would joke that he’d seen a Fusion 2+, a Fusion 3, even a Fusion 4, trying to suggest I’d been ripped off what with only having a ‘2’.

So, you can imagine my chuckling when during an over-zealous Jet Wash session at the local filling station, my ‘2’ fell off from the tailgate. Luckily, my quick reactions saved it from disappearing down the drain and I kept it safely, intending to superglue it back in place. But I never got around to it and of course Marty instantly spotted its absence the next time we met.

At our recent gig at Kessingland I went outside for a ciggie during the last break and noticed furtive activity around the back of my car. At the centre was Marty, crouched at the rear, apparently using all his strength and a massive screwdriver to drive screws into the otherwise flawless coachwork.

As I approached, the crowd parted to reveal this monstrosity:

There was much laughter as he explained that he couldn’t get the screws started. All a clever deception of course, created with mirrors, mixture of chewing gum and blu tack and a quality cast house number from B&Q.

Thanks for reading, more bulkhead preparation to follow soon…