The heatwave continues and I managed to get in a few hours of Saturday. A busy week ahead, with rehearsals and two gigs at the end means that there’ll be no more progress for maybe ten days so progress so far….

Two coats of Red Oxide were applied to the upper bulkhead using a brush. Spraying out the front is not an option unfortunately and in any case it would be difficult to access some of this area.

I have since brushed and rollered one thin coat of marine blue to seal this (no photo). This needs flatting and another coat once it’s a bit cooler. I found that the paint was going off to quickly in the current temperatures, brush or roller application requires the paint to dry slowly to flow to an acceptable finish.

I really didn’t want to spend too long on this, I’ve been here before. The inside centre vertical glazing bead was bent and damaged where a previous owner had tried to run a cable underneath. I took this off with a view to straightening it. This revealed an absolute mess. On the driver side the original (I think) glass was held in with black dumdum putty, and would still be serviceable. The other side however had a mixture of this and linseed putty. So I decided that it would all have to come out and the whole frame cleaning up.

Glass needs to come out

Dumdum putty comes out beautifully in this weather, you can almost roll it into strips as it was originally applied. The other side required scraping and chiselling. 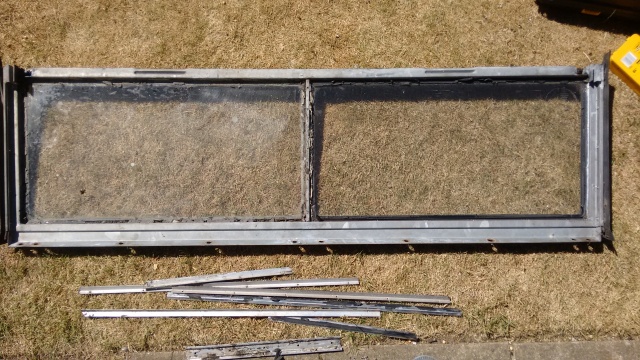 Aluminium glazing beads removed and yes, my lawn is DEAD

The black paint on the outside didn’t respond to Nitromoors paint stripper, and heat helped only a little. I thought this had been applied directly to the frame but it seems underneath that is a layer of what looks like silver Hammerite.

I couldn’t easily remove this so I rubbed down as best I could and applied T-Wash to the bare areas. Once this had activated and dried I prepared to etch-prime, but to my annoyance the T-Wash had turned overlapping Hammerite into a thick sticky goo. So much much more rubbing down to do. At least it’s only one side, the interior is quite good (above).

After a couple of hours, working in the searing heat (well as searing as it gets in Norfolk) I was able to etch prime: 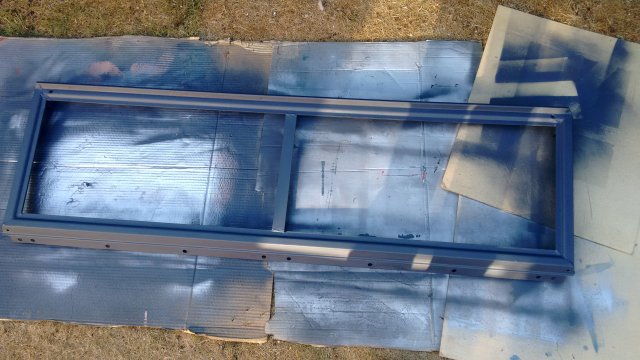 I will be trying out some ‘Silver Galv’ spray that I bought from Paintman some time ago, but unfortunately this will be another day, meaning I will have to give the above a light rubdown first.

You can buy a pair of these online for just £95 + vat, or there are two piles of rust that originate from a pair on Ebay for £35. So it was important to salvage them.

So I put them in my homemade vibrating parts cleaner for 3 minutes and out they came: 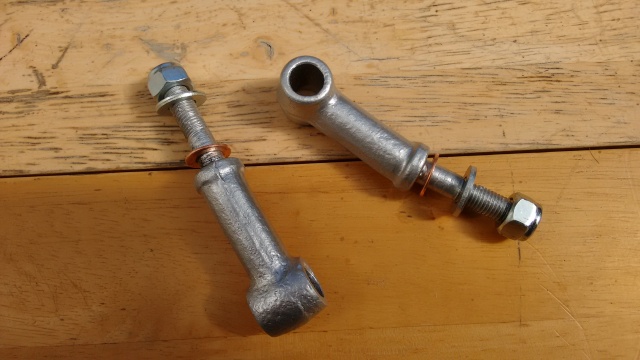 To make a homemade vibrating parts cleaner to get these results. just follow the instructions in this excellent 3-minute tutorial. This chap makes some very useful workshop equipment using parts from around the home and a few simple hand tools:

Well, actually, mine didn’t work as well as the one above as my kitchen isn’t suitably equipped, so I used a wire brush and soaked them in Coke for 24 hours. I wanted to experiment with Coke as a rust remover, and I can report that for me it is nowhere as effective as white vinegar. Once the rust was removed I sprayed a couple of coats of Screwfix No-Nonsense primer. New Nyloc nuts and copper washers.

Thanks for reading, more to follow after a week or so…